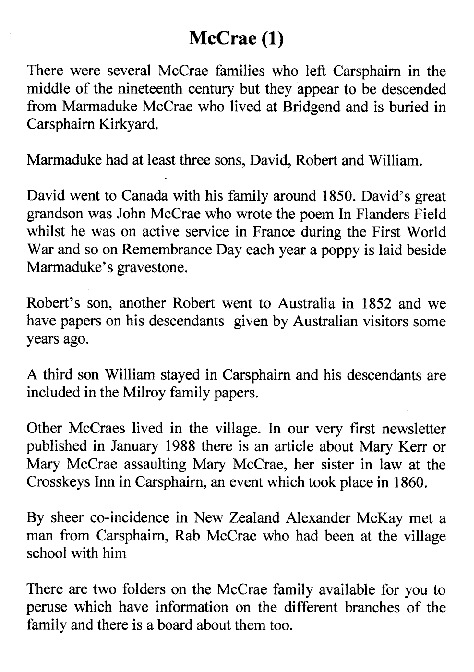 There were several McCrae families who left Carsphairn in the middle of the nineteenth century but they appear to be descended from Marmaduke McCrae who lived at Bridgend and is buried in Carsphairn Kirkyard.

Marmaduke had at least three sons, David, Robert and William.

David went to Canada with his family around 1850. David’s great grandson was John McCrae who wrote the poem In Flanders Field whilst he was on active service in France during the First World War and so on Remembrance Day each year a poppy is laid beside Marmaduke’s gravestone.

Robert’s son, another Robert went to Australia in 1852 and we have papers on his descendants given by Australian visitors some years ago.

A third son William stayed in Carsphairn and his descendants are included in the Milroy family papers.

Other McCraes lived in the village. In our very first newsletter published in January 1988 there is an article about Mary Kerr or Mary McCrae assaulting Mary McCrae, her sister in law at the Crosskeys Inn in Carsphairn, an event which took place in 1860.

By sheer co-incidence in New Zealand Alexander McKay met a man from Carsphairn, Rab McCrae who had been at the village school with him.

There are two folders on the McCrae family available for you to peruse which have information on the different branches of the family and there is a board about them too.